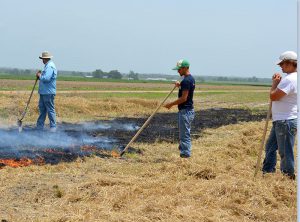 In some ways, farming is like cooking. Cooking would be much easier if we could leave the kitchen after eating and not come back until we make the next meal. But someone needs to put away the leftovers, do the dishes, and clean up the table.

Similarly, there’s work to do in farm fields after harvest and before planting the next spring.

After harvest in the fall, farmers take the harvested crops to market or store them on their farm. They don’t take the whole plant from the field, though.

The leftover parts of the plant, like the stalk and leaves from corn, remain in the field. This debris is called crop residue.

Using no-till and prescribed fire management are two potential ways to manage crop residue. Both practices help keep organic matter and nitrogen in the soil. However, research was needed to understand how these two practices can affect long-term soil health.

Lisa Fultz and her team want to help farmers determine the best way to manage their residue between growing seasons. To do this, her team decided to learn more about how no-till and prescribed fire management affect nutrients and microbes in the soil. Fultz is a researcher at Louisiana State University AgCenter.

No-till is a practice where farmers plant directly into the crop debris from the previous year. Prescribed fires are used to purposely burn off the previous crop debris with controlled fire. “Both of these practices have minimal physical disturbance to the soil,” says Fultz.

Both of these practices also come with drawbacks. No-till can cause poor conditions for crop growth like low spring temperatures and increased moisture, which promotes disease. Prescribed fire can leave bare soil vulnerable to erosion.

The team focused the research on wheat and soybean rotations and continuous corn production systems. “These are common practices not only in the mid-south, but across many areas of the world,” explains Fultz.

“Wheat and corn production leave behind residue,” she says. “Common practices, like conventional tillage, are highly disruptive. The need to identify viable conservation practices is growing in importance.”

Crop residue and its degradation by soil microbes is an important part of the carbon cycle. Plants store carbon during the growing season, then microbes use the plant residue for food. The carbon then gets stored in the soil in a chemically stable form.

“Fresh, green material in no-till fields is easy to breakdown and provides rich nutrients for soil microbes,” says Fultz. “Ash from burned residue is more chemically stable, but it doesn’t provide a nutrient source for microbes.”

The team found that impacts from crop management practices, like crop rotation or fertilization, outweighed the influence of prescribed fire for residue management. Researchers found some decreases in microbial activity after yearly prescribed burns.

Findings show prescribed fire had some possible short-term benefits for soil nutrient availability, but timing is crucial. Prescribed burning of wheat residue provided an increase of nitrogen for about 7 days. These benefits should be weighed against other possible impacts, like carbon dioxide production and crop yield.

No two farm management systems are the same, and their success is defined by the user. Scientists continue to examine possible scenarios to provide accurate and sustainable recommendations to farmers.

“I have always been interested in soil conservation and the potential it has to impact many facets of life,” says Fultz. “By improving soil health, we can improve air and water quality, store carbon, and provide stable resources for food production.”

Read more about this work in Agrosystems, Geosciences & Environment. This research is supported by the Soybean and Forage Grain Research and Promotion Board.

Trust In Food is a Farm Journal initiative

MENU
BACK TO TOP